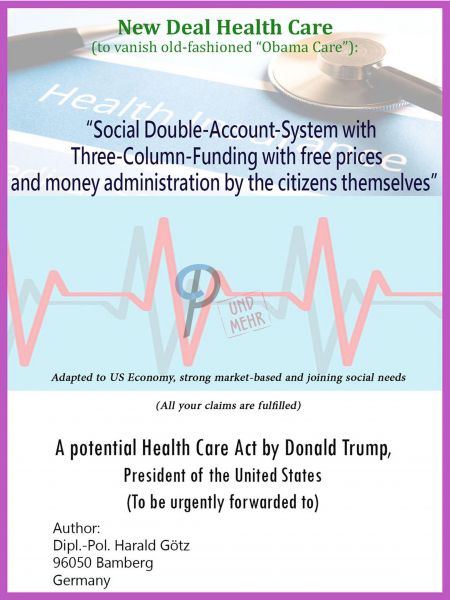 Beschreibung Bewertungen 0
Beschreibung
This ebook is an adaption of a completely new healthcare system to the US economy. It was... mehr
Menü schließen
Produktinformationen "Social Double-Account-System (A New Healthcare Solution) (Ebook)"

This ebook is an adaption of a completely new healthcare system to the US economy. It was written by a German political scientist to end the long-lasting quarrel within the bipartisan political system in the USA and to solve the problems above party lines. This new system means: Covered pre-existing conditions, no surprise medical bills, free choice of doctors or treatments, a healthcare system that is open to all (Americans), affordability, and the reflow of indirect taxes to private health accounts. And the greatest promise: A decrease in national debt! These are only a few of the author’s claims. This healthcare is not a usual healthcare system or insurance: The whole system is a social market economy embedded in the national economy.

The author took an interest in the topic during the heated-up 2016 presidential race, when Donald Trump announced that he wanted to repeal and replace Obamacare and was prepared to implement a new idea.  This and the fact that “A prophet has no honor in his own country” prompted the German author to work on this adaption. This New Deal Healthcare is titled “Social Double-Account-System with Three-Column-Funding with free prices and money administration by the citizens themselves” and was received by President Trump on January 27, 2017 by registered letter. Some explanations followed within the last years via email.